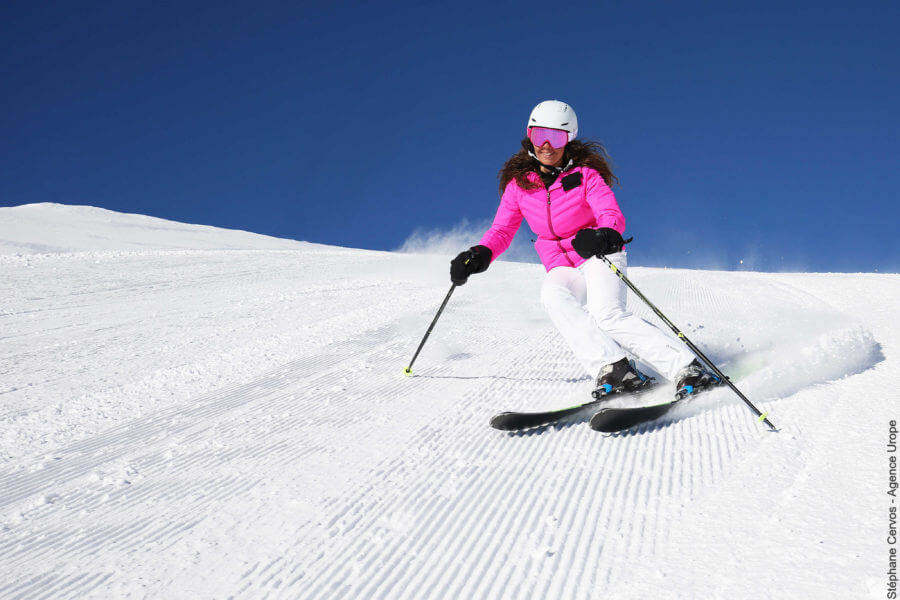 Posted at 10:45h in Uncategorized by rebecca

In one of the world's best ski resorts, intermediates are never going to be short of skiing — and while Val d'Isere enjoys a reputation as a playground for those who like steep and deep skiing, there's plenty more on offer.

Intermediates love mileage — getting out, exploring a ski area and trying new runs and new challenges. With 300km of exciting pistes spread at altitudes of between 1550m and 3456m, with two glaciers, the Espace Killy is the perfect ski area for adventurous intermediates. Because of the climate, altitude and orientation of the slopes, snow is almost guaranteed over Val d'Isère's long season that lasts from November to May — and the abundant natural snowfall is backed up by 900 snow cannons from Europe's biggest snow factory covering 40 per cent of the ski area.

Year on year, Val d'Isère continues to plough investment into its lift system — something that makes the biggest difference if you're looking to eat up the miles. Queuing in lift lines doesn't make for value-for-money and luckily with fast lifts and an extensive area, queues in Val — except for peak times — are really few and far between.

Intermediates fall into two categories — those who enjoy blue piste cruising, scenic coffee spots and setting up an itinerary for each day, and the others who want to tackle reds, push themselves over and over and take lessons to improve technique.

Chris Gill, author of new guidebook Where to Ski in France explains that “true blue skiers” need look nowhere else. “There are no blue runs down to Val itself and no, the reds are not easy, but the piste map also shows a great deal of blue (and green) skiing at altitude. Happily, this is all easy skiing; it doesn't much matter where you head — we haven't detected any nasty surprises anywhere on these higher slopes.”

The descents into the valley, explains Chris, offer rich rewards for the competent skier looking for a challenge. “Ski them early in the day as far as possible, when they are less crowded and less mogulled than later on,” he advises. “Even Santons and Piste M from Solaise can be very enjoyable in the right conditions.”

“To get the most out of Val d'Isère itself, you really need to be comfortable skiing steepish runs and hungry for the chance to get off-piste too — and strong intermediate will love the challenge that each day brings.”

But, warns Peter: “Val's interpretation of colour grading here is different to elsewhere: for green read blue, for blue read red, for red read black, for black…read a whole hatch of butterflies in your stomach.”

Itinerary for an intermediate ski day in Val d'Isère

Ken Smith, from Progression Ski and Snowboard School has a favourite day out in the resort for skiing with intermediates, one that offers a variety of slopes and conditions and that — best of all — are almost always nice and quiet.

“We start on the Solaise sector with a warm up run on the green Madeleine,” says Ken. “Follow that by heading up the Glacier chair and skiing all the way down the Glacier and Plan Milet run. Keep heading down to the valley bottom on the banked Piste L run before heading up the Laisinant chairlift which takes you into the Fornet sector. From there head up the Pyramides chairlift and then ski down the Petit Bois which is a lovely but challenging blue.”

Here, Ken suggests stopping for a coffee in Le Signal, which has both self-service and gourmet restaurants, and is considered by many as one of the best on the mountain.

“After a brief stop we then head up the bubble car toward the glacier. Ski down to the Cascade chairlift and ski the blue Pissaillas and/or the red Moraine run. If you have time head to the very top via the Montet T bar. The extra few hundred metres doesnt give you much more in the way of skiing but offers fantastic views from the top.

“Once you touch down head down to the Datcha chairlift and take that up towards the Madelaine. Cut across the Madelaine and ski down the challenging, long and rolling red run called the Arcelle. You come to a lonely chairlift at the bottom of the valley called the Manchet Express so head up to the top and then down the Madelaine (which you skied first thing).”

Finally, says Ken: “Go up the Pim Pam magic carpet then head straight ahead at the top. Head down the steep Plan and Piste M runs back into Val d'Isère. This itinerary can be skied in a morning if you keep moving along but can also be spread out over a full day with a few extra runs here and there.”