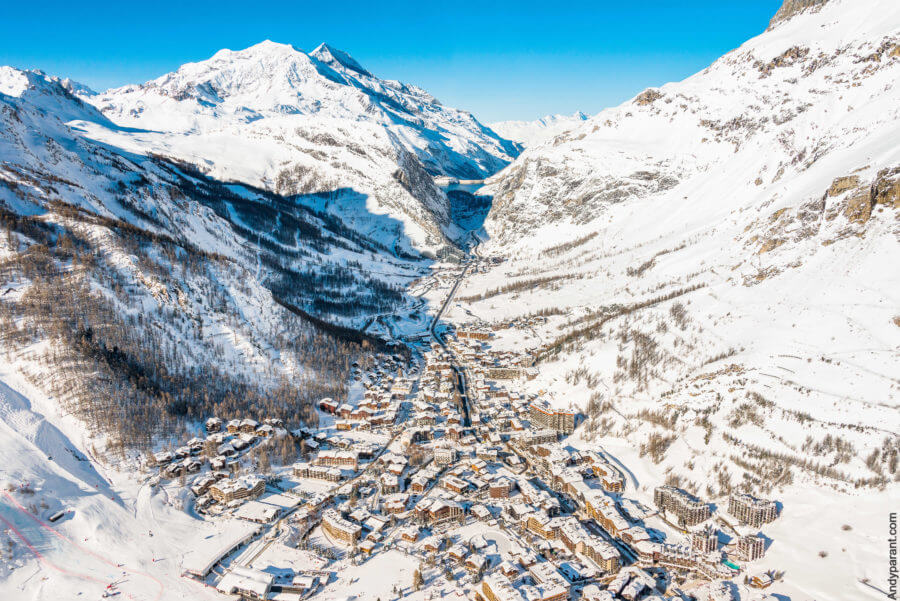 Posted at 10:30h in Uncategorized by rebecca

Val d'Isère rightly enjoys a reputation as one of the mega resorts in the world and that means it has as much for beginners as it does the gnarly, ice-axe carrying ski mountaineers. It used to be better suited to strong, fit, experienced skiers — and while these guys are still in for the time of their lives, since 2016 Val d'Isère has equalled its reputation as a great place to learn to ski. A two-year project to completely reshape the top of Solaise ski area (at a cost of €16million) changed its offerings for learners entirely — and the resort now has arguably one of the best set ups for beginners, both on the mountain and off.

There is 300km of piste skiing in the Espace Killy area that makes up Val d'Isere and neighbouring resort of Tignes — but of course beginner skiers aren't going to be putting in that sort of mileage on their first or even second weeks' skiing.

If you're new to skiing in Val d'Isère, the good news is that you don't have to shell out on a week's ski pass to get to grips with this strange — and often tiring — sport. Day passes for the green and blue runs that make up the beginner area on Solaise are available for just €37, which equates to €222 over ski days — a decent discount from the €294 full-price six-day ticket (though you can't ride the La Daille gondola for après, see below). Also included in that pass is the Rogoney blue run at the bottom. There are also two free lifts at the foot of the slopes for beginners, and free skiing for children below the age of five, and seniors aged 75 and over.

“The extensive beginner area at the top of Solaise has three covered carpet lifts on gentle slopes [making] Solaise as a whole close to being an ideal beginner area,” says Chris Gill, the hard-to-please author of Where to Ski in France, a no-holds-barred guide to skiing in France published in November 2018.

“The blue runs from the top of Solaise make ideal progression territory,” he says in his book, adding: “The top of the area is the Lounge, an exceptionally civilised picnic room/coffee bar with panoramic windows and good free loos, a rarity in these parts.”

“The Solaise area has become a fantastic area for beginners with covered ‘magic carpet' lifts and great simple pistes. Once they have mastered the greens here then the next step is to head over to the Bellevarde sector for a bit of variety,” he says. “The Verte run offers nice rolling pistes whilst the Génépy and Grand Pre are wider and more forgiving. For kids (big and small) there is a fun park called the "P'tit Cross" with banked turns and hoops to ski through. Once these runs have been mastered then there are a few blue runs in the area which offer a fair test as to whether you can ski over into Tignes or not.

“There is a lovely wide blue running down from the top of the Tovière area into Val Claret Tignes. One of the nice things about skiing is the travelling aspect to see different parts of the mountain and access a wider variety of nice restaurants. Luckily these slopes are achievable relatively quickly so people get a chance to travel and improve.”

There is no shortage of ski schools — no less than 15 — as you might well expect from such a mega resort. Le Chardon works with Progression, as well as Oxygène and the ESF, lining up lessons for guests in advance of their visit. All of these schools — and the others in Val d' Isère — are brilliantly set up for teaching complete novices through to experts.

Similarly, there's no shortage of ski hire shops in the resort, though Le Chardon makes life easier for guests by arranging equipment hire before the arrival of guests, using Oxygène and Snowberry, owned by Jock and Susan Dun, the former owners of Precision Ski.

Learning to ski is always nice if you're in a more picturesque area and the mountains surrounding Val d'Isère are nothing short of spectacular. The town itself, however, is equally pretty — built around an 18th century church with plenty of shopping and off-piste activities for those who don't want to ski all day, every day. All lift passes of two days and more offer one free entry to the Aqua Leisure Centre.

While Le Chardon offers a free, on-demand shuttle service to guests, this resort has what Chris Gill describes as “the best shuttle-bus system in the world” — praise indeed. Buses run every few minutes during the day along the mile-long stretch of resort, and a little less frequently later at night.

There's no need to miss out on Val d'Isère's legendary après ski if you're a beginner — the two hotspots for dancing and drinking beer in ski boots can both be reached on foot/by lift. La Folie Douce sits just at the top of La Daille gondola (newly refurbished for 2018/19), so you can even take your skis up there and pretend you've skied down if you're weary at the end of the day. Alternatively, there is a blue, Diebold, from the top of the Funival so end the day in style on skis (though, arguably it's advisable to ride the La Daille gondola back down after a session in the Folie Douce). The other hot spot to enjoy, Cocorico, sits right in the Rond Point des Pistes, the snow-covered open area at the bottom of the Olympique where ski schools meet every morning, so couldn't be easier.